*UPDATE* 5/1/20  We have had a heart-wrenching time with Cade over the past few weeks. His legs were healing so well and he was doing great, then one day he quit eating. By the next day he was having fast, labored breathing. We quickly got him to our vet. After xrays, bloodwork, and ultrasounds Cade was diagnosed with FIP. His chest cavity was 70% filled with fluids. FIP is a fatal disease caused by the mutation of a common virus. Until recently there has been no hope. However, there is an experimental drug that is being used to treat FIP. After much thought, we decided that Cade had fought too hard for us to give up on him now. We went ahead and started the drug. Within 48 hours, Cade’s breathing was back to normal and he had started eating. We are now almost 6 weeks in on an 84 day treatment plan and Cade is doing wonderfully. He went to the vet a couple of weeks ago to have his splints removed (YAY!) and the vet did an ultrasound on his chest. The fluid is gone. We are so thankful that he is progressing so well! We understand that it can be expensive and there are no guarantees, but we are going to fight this horrible disease as long as Cade is willing. We will keep everyone updated with how treatment is going. Send lots of love and healing vibes for Cade 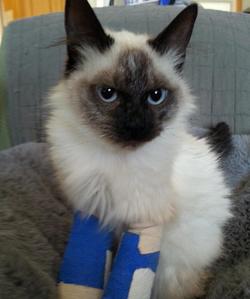 *UPDATE* 2/20/20 Our little Cade had his surgery yesterday! Everything went well and he is home starting his long road to recovery. Poor Cade has to stay in a cage to protect him from injuring his legs. So we gave him a penthouse with a view! He is right in the middle of things and can watch out the window. He is on cage confinement for at least 6 weeks and then he will be reevaluated to see if he can start rehab at that point. 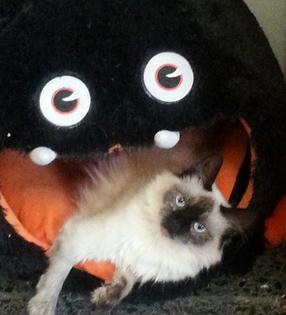 Poor little Cade came to us after he was found all alone in the road. Thankfully a good samaritan saved him. Xrays show this poor little guy has broken both of his front legs by his wrists. Our vet said it has been this way for a while. The injury was probably caused by falling or being thrown from a pretty good hieght. Cade walks on his "knuckles" right now, it is painful and he cannot get around easily. We thought this little 2 lb 6 oz. guy was about 10 weeks old, but when we took a look at his teeth he is closer to 5 months! (His adult canines are in, sadly they didn't push out the baby teeth so they will need to be removed too). Our vet will be able to splint and hopefully put plates in to enable Cade to walk without pain. Cade has to be bigger before his surgery can be safely preformed, so we will care for him and love him while he grows stronger. Unfortunatley Cade also had a nasty respiratory infection that he needed to be treated for.

Through all of this Cade is the sweetest boy. He loves the other kittens and adores people. Cade does his best to play and we are looking forward to helping him live a pain free life. 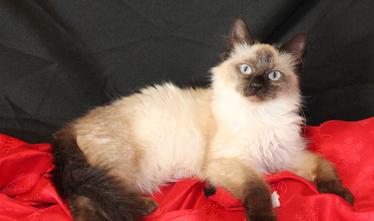